Hi, I’m Laura, aka “KnottyLa” – so glad you could stop by. I’m a knitter, designer and fiber enthusiast who has now ventured into the creative application of color to string as a new artistic outlet. Whether you’d describe my colorways as “subtly variegated” or “tonally shifting solids” they are fresh and unique.  I even have some high-contrast variegations for those of a more daring nature.

All my yarn is hand-dyed in small batches, so even though colorways will be repeated, every dyelot will vary slightly. In addition, I will be offering signature colorways as well as the occasional one-offs as I experiment with color combinations and application.

I began knitting in 2004 when my best friend at the time, who worked in the film industry, taught me how to knit so that no matter what film project she was or wasn’t working on, she’d always have someone to knit with. My first knitting project was supposed to have been a scarf, but turned into a cat snuggle, due to lack of knowledge of knitting gauge and impatience to move onto something else. A well-known blogger was hosting a KAL/CAL where you made pet bedding to be donated to various animal shelters and hospitals, so my next few projects were for this charity endeavor. It gave me the opportunity to experiment with different stitch patterns and textures, while doing something that brought comfort to those creatures who direly needed it.

Since then knitting and fiber arts has brought me much joy and serenity. But it has also given me a creative outlet, as well as introduced me to a vast community of amazing people from all over the world, in all walks of life.

Who exactly IS the Dizzy Blonde?

The Dizzy Blonde is a rescue pup named Trixie who was an accidental adoption – I never intended to adopt a dog, but Trixie chose me.  So basically, I really had no choice in the matter, not that I mind. She is part Pomeranian, part who knows what?..pure-blooded adorable yellow mutt. A few days after I got her home, Trixie was playing, chasing her tail and ran straight into a wall. Funniest thing I’ve ever seen.  I told her… 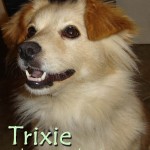 “It’s a good thing you’re pretty,” I said, “Because you’re one Dizzy Blonde.”